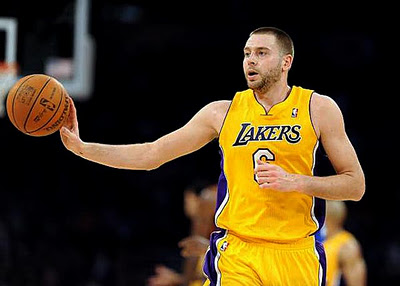 “#theLakersAreSoWhite:” Celebrations of the White Baller

One of the more popular twitter trends of late has been the #theLakersAreSoWhite meme, a response to a Lakers’ roster that has five white American players: Luke Walton, Jason Kapono, Josh McRoberts, Steve Blake, and Troy Murphy. The meme includes a range of posts from the silly – #thelakersaresowhite half the team is skipping the plane back tonight to open a gluten-free bakery in #ripcity – to those based solely around recycling stereotypes of blackness and whiteness:

#thelakersaresowhite Kobe bought them all do rags for Christmas and they all thanked him for the new “handkerchief”.

In speculating as to how the visibility of a cluster of white American players on the NBA’s principle franchise, Adande makes clear that the racial demographics of the NBA is the result of a myriad of factors from culture (self-fulfilling prophecies) and role models, to resource allocation and inequality in the availability of sports. “The acceptance of this ‘natural athlete thesis’ … is instead an insult when you really break down all the implications,” writes Todd Boyd in Young Black, Rich and Famous. “If this was true, how do we account for the millions of black people, who have never played a sport? Why then are not all black people who pursue sport successful? The biological argument is without any merit, though it is argument that keeps getting recycled. Culture is key to understanding this phenomenon, but few are ready to accept it as such” (Boyd 64-64). I n this regard, Adande’s explanation of the Lakers changing color is a challenge to “the natural athlete thesis” and the memes that have been generated in response to the supposedly new found diversity of the team.

Yet, Adande’s shock and awe reinforces the very spectacle that so often surrounds the entry of whiteness on the basketball court. The mere fact that he writes an article, and that countless others chimed in with twitter comments (the meme) is a testament to the ways in which dominant discourse normalize blackness within the context of the NBA. The spectacle and discourse of the white baller anomaly pivots on the assumed natural connection between blackness and basketball. “Basketball’s prevailing ghettocentric logic keys on essentializing the embodied practices and experiences of Black urban male youth as a means of denoting an ‘authentic Blackness’ designed to appeal primarily to White, middle-class consumers,” writes David Andrews and Michael Silk.