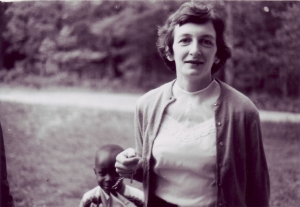 Emblematic of a generation of men and women in the South that challenged their parents’ generation’s views on race, jobs, gender, sexuality, and a broader sense of the world, Anne Braden did more than look backwards. She, like Bayard Rustin, was a woman “ahead of her times, yet the times didn’t know it.” Anne Braden: Southern Patriot, a documentary from California Newsreel, highlights how she did not merely respond to the regressive and oppressive realities of the South, but instead looked forward toward a more just and equal society.

Like Ella Baker, Braden was committed to and involved in a myriad of movements, fighting against economic injustice, environmental injustice, war, classism, racism, and sexism. Where there was violence and degradation, Anne Braden was likely fighting alongside countless others. The film highlights not only her work, but her ethics and ethos, a willingness to confront injustice whereever it confronted her. Through the film, Braden expresses a level of fearlessness that spit in the face of white supremacy, patriarchy, and class inequality. She was always standing in opposition to white supremacy, on the other side of the police state, yet the danger and the consequences never led her to shy away from a fight.

What Anne Braden’s life reveals, and what Anne Braden: Southern Patriotdemonstrates in vivid detail, is how her work was both an external fight and an ongoing reconcilliation with her own whiteness. Her fight was with her own privileges and their relationship to a broader system of white supremacy. In a powerful moment in the film, Braden recounts a moment of clarity where she felt the impact of American racism in her own ethos and worldview as much as with those “backwards neighbors”:

In the mornings before I came downtown I would call the courthouse, to see if anything big happened overnight, because if there had I’d have to skip breakfast usually and go on to the courthouse and get the details and get it into the first edition of the afternoon paper. When I would get downtown I often stopped for breakfast and met a friend there. And the waitress was putting our food down on the table. And so he said anything doing? And I said no, just a colored murder. And I don’t think I’d have ever thought anything about it if that black waitress hadn’t been standing there. She was pouring coffee into our cups and her hand was sort of shaking, but there wasn’t an expression on her face. It was like she had a mask. And my first impulse was that I wanted to get up and go put my arms around her and say, “Oh I’m sorry. I didn’t mean that. It’s not that I don’t think the life of your people is important. It’s my newspaper that says what news is.” And then I just suddenly realized I had meant exactly what I’d said.

Listening to these words, and others from Braden, I was struck by the resonance within our own moment. The silence afforded to Chicago compared to Sandy Hook, for example, and the erasure of anti-black state violence and mass incarceration from public discourse highlight how Braden’s assessment still matters 40 years later. Her diagnosis of society, and every white member of society, remains an unfortunate reality and this is why her life’s work deserves attention.

“What you win in the immediate battles is little compared to the effort you put into it but if you see that as a part of this total movement to build a new world, you know what could be. You do have a choice. You don’t have to be a part of the world of the lynchers. You can join the other America. There is another America!”