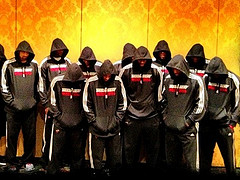 Under The Hood: A New Take On Activism In Sports

As individuals from throughout the United States and in other parts of the world voiced their anger and outrage at the murder of Trayvon Martin, there was an initial frustration from many in the social media world about the reticence and silence from today’s (black) athletes. The wish that athletes, and really black athletes–since it is rare to hear about the failure of white athletes–would uses their platform to shape change has become commonplace. So when the Miami Heat and several other players joined the calls for justice, there was certainly a level of joy and satisfaction.

Whereas individual athletes have a long tradition of protest and using the platform of athletes to express political sentiments, from Tommie Smith and John Carlos to Toni Smith, few teams have collectively taken a stand. Donning hoodies, the Heat stood in solidarity with Trayvon, shining a spotlight on the deferred justice in his case and the real-life dangers of racial profiling. As a team, they stood together as one, although it is clear that both Dwyane Wade and LeBron James were the ringleaders beyond this effort. The picture and the tweet, under the hashtag of #wewantjustice, were in fact the impetus of James himself.

Many have expressed surprise at the involvement of James and even Wade, given their emergence as America’s team to hate, as emblematic of the me-first baller generation. This is particularly the case for James, who has been subjected to endless criticism since high school. While much of the condemnation often focuses on his unwillingness to take the “big shot” in important games or his attitude, some progressives have lamented the lack of political engagement from James. While not unique in their eyes, his power and status elevates him in this regard. Writing about James’ refusal to sign a letter from teammate Ira Newble concerning China’s role in the Darfur genocide, Dave Zirin took James to task for his refusal to join the fight:

At the tender age of 22, you have the galactic talent to make us wonder if a mad scientist had Magic and MJ genetically spliced. But talent ain’t wisdom. In a recent interview, you said that your goal in sports was to become “the richest man on earth.” You also told ESPN, “I’m trying to be a global icon … on the level of Muhammad Ali.”

These dreams are compatible only if you choose to emulate Ali the icon and not Ali the man. Ali the icon is used to sell books, computers, snack foods, and anything not nailed down. Ali the man sacrificed his health, future, and untold millions by standing up to racism and war. No one is demanding you do the same. No one is insisting you get in front of a microphone and say, “I ain’t got no quarrel with them Iraqis.”

But you should understand that the reason Ali remains a “global icon” is precisely because he didn’t define himself by his corporate sponsors. When his handlers told him to stop throttling the golden goose of fame he said, “Damn the money! Damn the white man’s money!”

“The choice you face is frankly quite stark: How free do you want to be?,” he asks. “Do you want to be ‘King James of Nike Manor’ or the King of the World? Only by refusing to be owned, only by displaying independence from the very corporate interests that enrich you, will you ever make the journey from brand to three dimensional man.” With his participation with the Million Hoodie March, and the efforts from other Heat players, it is clear that not only has James made clear how he “wants to be” but silenced his critics by highlighting his willingness to take the big shot, one far more significant than any last game heroics.

At one level, the response reflects the connection that James, Wade, and several other players felt with Trayvon. According to James, “I have two boys, D-Wade has two boys and a lot of our teammates have sons. This could be one of our sons someday. The thought of sending your son to the store and never having him return is an emotional one for any parent.” In reading their statements, it is clear that their statement didn’t merely reflect their being fathers but father of black boys.

Continue reading @ Under The Hood: A New Take On Activism In Sports | Racialicious – the intersection of race and pop culture.