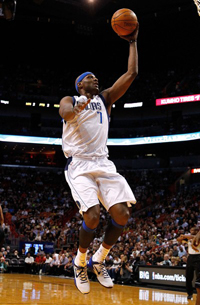 The callousness of the NBA.

Taking a break from LeBron James, the NBA’s resident hateratti have recently focused its attention on Lamar Odom. With Carmelo, Andrew Bynum and Russell Westbrook ballin’; Kobe, DRose and Dwight Howard hurt; a “perfect” Kevin Durant; and Deron Williams and Kevin Love being on the Nets and Wolves, the NBA’s mean machine has turned its attention on the reigning Sixth Man of the Year.

The season began tumultuously for Odom, with his being initially traded to New Orleans only to be sent back to the Lakers, who at his request quickly traded him to the Dallas Mavericks for a draft pick. Media pundits and fans denounced the Lakers’ ineptitude all while praising the Mavericks for reloading their roster as part of their quest to repeat as Champions.

Unfortunately, the trade was probably the highlight of Odom’s (and the Maverick’s) season as things have gotten progressively worse, leading to his recent deactivation. From Sixth Man of the Year to persona-non-grata in less than a year is sad, yet the level of anger, vitriol and demonization directed at Odom is a sad commentary on sport and society.

Odom’s difficulty on the court has been widely attributed to his selfishness and inability to get over the trade. Portrayed as emotional and childish, his career-low statistics have been used to comment on his personality, demeanor and attitude. For example, Jen Engel Floyd, with “Odom mastered The Art of Not Trying in Dallas” argues that “he was hauling a lot of emotional baggage with him from L.A.—and he chose to do nothing.”

While providing zero evidence (reports have been that he wasn’t disruptive in the locker room), Floyd describes Odom as a “toxic force” resulting from his anger about being in Dallas—“There are pejoratives to describe Odom’s behavior. ‘Unprofessional’ and ‘selfish’ immediately spring to mind. I am kind of partial to ‘whiny, soft, narcissistic L.A. jerkhole.’”

Engel was not alone in the ad hominem personal attacks that focused on Odom’s maturity and demeanor over anything else. According to Mike Chiari, “rather than moving on and accepting that he wasn’t with the Lakers any longer, Odom decided to sulk, and his game was severely hindered by it.” Likewise, Benjamin Hochman continued the trend of “hatin’ the player” and not the game, questioning Odom’s “mental toughness.” Most revealing, and weeks before the Mavericks decided to banish Odom from the team, Jason Whitlock condemned Odom for his failure to play against the Lakers, explaining his failures to uphold a standard of masculinity.

Odom has chosen to sulk and brood and hide.

He wants to move back to L.A., and he apparently is willing to withhold his services in an effort to make it happen.

The Lakers dumped him, and, citing family matters, Lamar declined the chance to exact revenge in a nationally televised game.

Are you kidding me? Did Jordan skip games against the Bulls? Did Favre pass up a chance to play the Packers? OK, Lamar Odom is not Jordan or Favre. Kyle Orton took his shot against the Broncos and Tim Tebow. I bet Jeremy Lin will relish his chance to play against his hometown Golden State Warriors.

Family matters. You have to grow a pair to start a family, Lamar.

Evident here and throughout the national “hate on Lamar tour” is a tone that demonizes Odom; one that imagines him as selfish, immature, mentally weak, soft and feminine. Even the criticism directed at him for collecting a paycheck (enter Charles Barkley and 63 percent of fans in one poll) subscribes to the belief that Odom’s failures on the court are reflective of a choice not to commit to the Mavs, the game of basketball, or the fans. These commentaries are both personal and paternalistic, criticizing Odom for disappointing them because he chose to put himself in front of anyone or anything else.

What is disappointing about these responses is that they are yet another reminder of how society—whether it be the sports media or fans—views NBA stars as little more than commodities who are supposed to run up and down the court. The denied humanity and emotions, particularly impactful with the sports media’s treatment of black athletes, has been on full display. The lack of care or concern for his emotions—for the trauma that he is experiencing—embodies not just the ways that athletes are treated as dehumanized commodities who should produce or exit stage left, but also the ways that society denies and demonizes the mental trauma and the stress of African Americans.

Any failure to uphold that role is met with derision and pathologizing. In Odom’s case, his failures are explained in simple terms: He didn’t want to be traded, and rather than “man up,” he sulked, all the while collecting a paycheck. Given this tone, there has been little room to think about how Odom’s own history and recent events in his life might be impacting him.