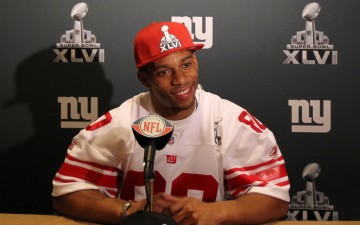 The tremendous “rookie” season of Victor Cruz will come to an end on Sunday. While in his 2nd official year, the 2011-2012 campaign was ostensibly his first go-round in the NFL, and what a year it has been. While the nation obsessed over a mediocre quarterback at the expense of other players, Cruz had an amazing season. Rivaling the historic rookie season of Cam Newton, Cruz has been spectacular with 82 receptions, 1,536 receiving yards and 9 touchdowns, dominating during the postseason. Yet, that hasn’t been the story of Victor Cruz, nor has the media discourse sought to highlight his Black-Puerto Rican identity, forsaking for a narrative of sports as a great equalizer, of football as the melting pot, and ultimately the NFL story as evidence of the American Dream and American exceptionalism.

The media narrative surrounding Cruz has been simple, if not misleading. He rose from the ashes of poverty, despair and mistakes to NFL stardom. Focusing on disciplinarity and the efforts to pull himself up by his bootstraps, the celebration of Cruz has been much more a celebration of the American Dream and those in his life who made all of it possible. According to Ohm Youngmisuk, Cruz “nearly became another academic cautionary tale of a talented athlete who never made it because he didn’t take school seriously.” Reflecting tough love and an accountability, he was dismissed from University of Massachusetts because of his GPA and other academic failures. After attending Passaic County Community College and County College of Morris, he was able to reenroll back at UMASS. The media has eaten up the narrative, framing this path as unusual and part of his maturation process.

Equally telling, the story emphasizes how those adults outside of his family, helped him, demanding that he change his attitude and approach: “At any point, he could have strayed and never made it back to college — like so many others. But Marsh-Williams’ [the school’s assistant dean/provost of undergraduate advising] message stuck with him like a stingy cornerback,” writes Youngmisuk. And he adds: “Marsh-Williams demanded accountability, had little sympathy for one of UMass’ best athletes….(he)lectured Cruz with more tough love than the no-nonsense Tom Coughlin ever could.”

As part of the celebrated immigrant, bootstraps narrative, several stories chronicle his upbringing as one where he was “raised by a single Puerto Rican mother.” Playing on stereotypes of absentee Black fathers, the narrative erases the complexity and tragedy of Cruz’s life, turning him to a caricature of sorts. While his parents never married, it is clear that his father was part of his life. Mike Walker, a firefighter in Paterson, New Jersey, committed suicide in 2007 following a car-accident and a battle with depression.

The failure to talk about his relationship with his father (or to provide context about mental health, suicide and the African American community), and the efforts to celebrate how coaches, administrators and to a lesser extent his mom provided him with the necessary tough love and disciplinarity, is particularly disconcerting. Cruz is reduced to an advertisement for the American Dream, for the idea that hard work, discipline and proper values will lead to stardom.

Although much has been talked about in relation to his Latino/immigrant background, little has been said about his Black ancestry or even his Nuyorican identity. At one level, the media focus on his Latino background given their scarcity within sports culture. Among a group of 31, including the Patriots’ Aaron Hernandez, Arian Foster, Marc Sanchez, and Tony Romo, Cruz has come to embody a generation of Latino football players. Yet, the narrative surrounding Cruz seems more interested in celebrating his story as an immigrant story, a story of opportunity for Cruz and others to learn “the American way.” “It is a telling example of the natural progression the sport has made in Hispanic communities across the United States,” writes Jorge Castillo. “As the generations following immigrants from Latin American countries assimilate into American culture and, with it, take up America’s sport.”