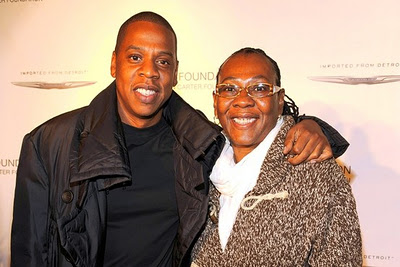 I have resisted the temptation to write about the media spectacle surrounding the recent birth of Blue Ivy Carter. The obsession has been striking on so many levels: (1) it seems to reflect a desire to represent Shawn Carter and Beyoncé as royalty. Their cultural visibility and power reaffirms a narrative about the American Dream and post racialness. Blue Ivey Carter becomes evidence of multi-generational wealth; her arrival in the world affirms the American Dream as Beyoncé and Shawn Carter now have millions of dollars AND the prescribed family structure (not sure about dog and picket fence). (2) There also seems an investment in constructing hip-hop as growing up as evident by a politics of respectability and through a patriarchal nuclear family. The media discourse has imagined a family (or children) as the necessary step toward becoming an adult.

Mark Anthony Neal brilliantly reflects on this particular aspect, noting how the media has constructed Carter as ushering in a new era for hip-hop. “There are of course other examples of rappers who do take parenting seriously.” More importantly, Neal works to disentangle lyrical flow from parenting:

To be sure, writing a song about your daughter is the easy part. Fathers are often lauded for the more celebrated aspects of parenting: playing on the floor, piggyback rides, the warm embraces after a long day at the job. Mothers, on the other hand, are often faced with the drudgery of parenting, like changing soiled diapers, nursing, giving up their careers to be stay-at-home moms, and the criticism that comes if they don’t live up to societal notions of what “good” mothering is.

The celebration of Shawn Carter’s fatherhood and the lack of commentaries regarding Beyoncé as a mother are telling on so many levels. At one level, it reflects the erasure of mother’s labor, as noted by Neal. Yet, at another level it reflects the desire to stage yet another referendum on black fathers and mothers within the public discourse. For example, Joanna Mallory recently penned: “Jay-Z anthem to fatherhood is music to the ears of black leaders and family advocates.” Arguing that, “72% of African-American kids are raised without a dad,” Mallory celebrates the birth of Blue Ivey Carter because she inspired her dad to write “Glory:

“But she is also rich in love, as Jay-Z exults in his song “Glory.” The best part? A lot of other babies are going to benefit. Because Jay-Z’s ecstatic reaction to being a dad will be the strongest boost yet to a growing movement in the black community encouraging responsible fatherhood.

Concluding that the song is a necessary remedy for absent black fathers is emblematic of the media discourse here: sensationalistic, simplistic, and wrapped up in a narrative of distortions, misinformation, and stereotypes. It is yet another reminder those critics should not wax sociological.

Having already written about this in regards to Colin Cowherd and Touré, I thought I might just recycle part of the “Blaming Black Families” piece, albeit with a little remix (I swapped out Cowherd’s name for Mallory). The fact that critics, politicians, and the public discourse continually recycles the same fallacious and troubling argument mandates that I merely recycle my work as well.

The efforts to recycle the Moynihan report, to define father as natural disciplinarian and mother’s nurturing, to link cultural values to family structures, and to otherwise play upon longstanding racial stereotypes, is striking.