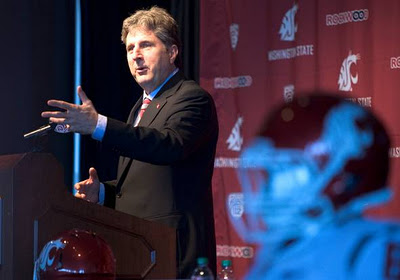 On December 6, 2011, amid the jubilation of students and alumni, fanfare from the marching band, and media hype, Washington State University (WSU) presented its new football coach to the public. After four losing seasons, the announcement that a proven winner would take the helm had Cougar nation in a frenzy, excited by the high scoring offense and return of fun to the Palouse. Much of the media coverage echoed fan sentiment: With headlines like “Why Mike Leach is Awesome” and “Leach is a Dream hire,” journalists and pundits alike celebrated the bold decision making of Athletic Director Bill Moos and the promising future of the once great program.

Apparently, the unfolding sex abuse scandals at Penn State and Syracuse, the play of Ndamukong Suh, and the NBA labor agreement have exhausted the always-limited critical powers of the sport media and sport fans alike. Even in a social moment seemingly primed for connections between sport and society, few, if any public voices seemed willing or able to do so: the short lived outrage sparked by Taylor Branch’s “The Shame of the Game” a scant two month earlier had no lasting resonance, no place in public discourse. In fact, when framed critically for students on campus, our classes reacted with indifference, if not hostility.

Two fundamental issues are lost in the hype, pleasure, and possibilities surrounding the new hire: the racial politics of college athletics and the increasingly inadequate resources devoted to higher education. Indeed, the hiring of Mike Leach exposes the workings of higher education in stark terms, highlighting the ways in which the status quo simultaneously perpetuates economic and racial inequality and masks structures of power.

Fifty years after integration of it began in earnest, big time college athletics remains one of the clearest of examples of racial inequity and racist exclusion in the United States. Historically white colleges and universities exploit black bodies for publicity and profit. Although black athletes have dominated football for decades, few coaches and fewer administrators are African American. Efforts by organizations like Black Coaches and Administrators have made a difference to be sure: African American head coaches have rise from 1 in 1979 to 25 at the start of this season and today 31 of 260 offensive and defensive coordinators (11.9%) are black. The recent firing of Turner Gill at the University of Kansas not only reduces the total number of active head coaches, but reminds us how limited the success of black coaches is: only one black coach (Tyrone Willingham) has been hired after being fired as a head coach (see here for additional information). The hiring of Mike Leach thus fits a broader pattern. Historically white universities headed by white Athletic Directors, such as Bill Moos at WSU, tend to hire white coaches.

Arguably more troubling is how Leach was hired. The search committee appears to have been Moos, who wanted to make a bold statement about Cougar athletics, increase attendance and alumni interest, and make the program relevant again. This too resonates with prevailing practices in college athletics, ranging from unilateral hires to selecting internal hires groomed for the position, and virtually ensures the unbearable whiteness of college coaching, where the failure to take measures to cultivate and promote a diverse athletic leadership, it is unlikely it will ever materialize. This has nothing to with overt racism and isn’t a question about the intentions of any individual. Rather priorities and preoccupations render such questions largely unthinkable, and when asked they are deflected by defensiveness about “how race doesn’t matter” and how he was “best qualified person.” In the end, don’t we need to reflect on why, how and the significance of candidate pool being overwhelmingly white?

In its most recent Annual Hiring Report Card, the BCA gave WSU a C for its hiring practices. No doubt, the fait d’accompli hiring of Leach would receive an F. But one might wonder when did grades ever stop fans and alumni from enjoying college football. As with the larger shifts in our society that has resulted in further economic inequality, even more evident as we examine persistent and worsening racial inequality, we are struck by the symbolism here of the a millionaire white coach profiting off the labor of black players even while the students, faculty and staff at the university are left behind by tuition increases, worsening working conditions, and a culture defined by budget cuts.

As with much of the 1%, Leach’s salary far exceeds that the 99% of faculty and staff at Washington State University. Earning an astounding 2.25 million dollars per year, Leach is set to become the third highest coach in the Pac-12. Compared to the average associate faculty members’ salary, who makes $74,700, the disparity in income is significant.