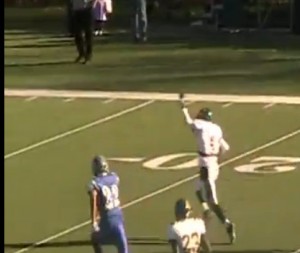 With 6 minutes remaining in the MIAA 4A Super Bowl (Boston), Matthew Owens faked an inside hand off, breaking free to the outside as he raced toward the endzone. Obviously overcome by emotion, understandable given that he was about to score the potential game- winning touchdown, which would send his school to the state championship, Owens began to “celebrate.” As he crossed the 20-yard line, he briefly raised his arm in celebration, prompting the referee to throw a flag, nullifying the touchdown. In the end, his Cathedral High School squad would fall short of their goal, losing 16-14 to Blue Hills. What Owens had imagined to be the perfect birthday present (he turned 18 on game day) and described, as the “play of his life,” has no happy ending. There would be no Hoosiers or Miracle ending, not surprising given the ways in which race, class and sports operate in contemporary America.

While clearly not a violation of the spirit of the rule (and even its written language), my interest here is not to debate the call or even the rule (you can go here for a longer discussion). What is revealing about the ensuing debate regarding the penalty assessed to Owens is how many people have used this moment to demonize Owens, and rouse the circulation of dominant stereotypes about blackness and the inner-city.

For example, in an article describing Boston Mayor Thomas Menino’s reactions to the penalty, commenters used this incident as evidence of the pathology and dysfunctional values of inner-city communities

Occumom: “It has now become a “diversity culture” issue. Mumbles will excuse the typical bad behavior

OccupyBoston: “Bottom line here is that the thug knew the rules, the ref spoke to the players before the game. And the thug broke the rules for whatever reason, immaturity, bad breeding, bad parenting, bad something. In life there are ramifications for bad conduct. Just because he’s black doesn’t mean he should get a free pass.”

IWuvAlienCahThieves: First he supports Liz Warren’s Occupiers, now he supports a thug behaving badly, in flagrant violation of rules that were explained to him very clearly before the game.

Is our Mayor becoming an anarchist in his advanced age? Or does he selectively enforce and judge people based on race or political affiliation? Yes that’s it. He is corrupt.

Alleging that Owens is a “thug” and his behavior results from “bad breeding” and “bad parenting,” and decrying that “because he’s black doesn’t mean he should get a free pass” makes the racial dimensions of these responses quite clear. Owens, and blackness in general, is rendered as both undesirable and suspect because of the cultural morals and values that “thugs” or inner-city youth supposedly bring into the arenas, fields and stadiums that saturate America’s cultural landscape. Given the danger and immorality practice by “thugs” these respondents celebrate the referee as providing the necessary punishment and discipline for those who otherwise are incapable of civilized behavior.

via The Layup Line » Zero Tolerance or Zero Conscience: Is High School Football Being Over-Policed?.