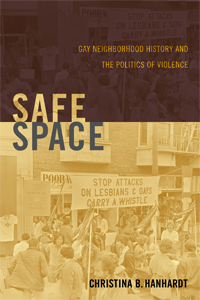 Contemporary racial discourses are defuse and far-reaching; yet, within the fast-pace news media cycle, and a mainstream media more invested in the sensational and the spectacle, rarely do these conversations move beyond talking points, buzz words, and bumper stickers. This aptly describes the nature of racial discourse emanating from mainstream media and political discourses. While evidence in a myriad of issues, mainstream coverage of social movements, marriage equality, gentrification, and crime is most certainly emblematic of a flattening and flattened discussions of these crucial issues facing the nation.

Dr. Christina Hanhardt, associate professor of American Studies at University Maryland, steps into this historical vacuum, offering readers an important book on “how LGBT calls for ‘safe space’ have been shaped by broader public safety initiatives that have sought solutions in policing and privatization and have had devastating effects along race and class line.” Offering insight into the histories of urban development and neoliberalism, into social movements and GLBT civil rights activism, into race relations – conflicts and alliances –, and into discourses and policies around crime, Dr. Hanhardt not only chronicles several important chapters in urban history but also offers a framework for dialectical and intersectional discussions. To talk about and understand gentrification requires understanding the racial history of redevelopment, which requires understanding the white supremacist imagination with respect to crime; all of this helps us understand discourses around policing and state violence, from anti-sodomy laws to stop-and-frisk; in the end (or the beginning), this complicates our discussions of the history of anti-GLBTQ state violence and the experiences of communities of color. Amassing “extensive archival and ethnographic research in New York City and San Francisco,” Safe Space: Gay Neighborhood History and the Politics of Violence is a powerful text on so many levels.

In recent years, there have been many discussions of relations between (white) GLBTQ communities and the black community. Much of contemporary media discourse and reporting continues to focus on black homophobia, seemingly arguing that black homophobia is an obstacle to not only political power and equality (cue various reports about Proposition 8 and the limited coverage of black activists working for marriage equality in New York or Maryland) but to progress (p. 13). Dr. Hanhardt offers some historic perspective, making me wonder why the conversation always focuses on “blacks turning their back on fight for marriage equality” and not on how the focus on crime and safety from GLBT activist groups was a far more deleterious betrayal. Dr. Hanhardt pushes the discussion beyond the claims of heightened black homophobia to reflect on how blackness is imagined in connection to GLBT communities. Framed as an obstacle, and a source of pathology, mainstream discourse frames blackness as a pollutant compared to the integration of GLBTQ communities into neighborhoods as a source of maturation and growth. Whether through narratives of homophobia, opposition to redevelopment, or crime, Dr. Hanhardt highlights the many ways that blackness is imagined as an impediment to progress and urban renewal in a cultural, economic, and political sense.

The issue of visibility is also a prominent theme within Safe Space. Here, Dr. Hanhardt argues that visibility has been central to LGBTQ activism, especially in a post civil rights context. Movements have consistently argued that visibility of GLBTQ communities, or the legibility of queerness, correlates with levels of violence. In other words, visibility leads to increased danger. At another level, Dr. Hanhardt argues that mainstream GLBTQ civil rights groups have also seen visibility is also a source of power, security, and safety – that visibility and awareness of hate crimes results in attention, political mobilization, and police attention. “Decades of activism produced innumerable organizations and agencies to deal with ‘homophobia – whether expressed by police misconduct, antigay violence, or even unneighborly hostility,” writes Hanhardt. “Laws against private, consensual sodomy were eliminated as a general criminal category, and LGBT activists largely succeeded in dissociating the generic terms of homosexuality – and to a lesser degree, transexuality – from the broad category of criminal” (p. 5).

Safe Space brilliantly and importantly illustrates the ways that these narratives and frames privilege whiteness and middle-class identities (as well as those experiences of gay men). The presumption of safety resulting from invisibility works from particular assumptions about safety and the possibility of invisibility – Dr. Hanhardt persuasively documents how this focus on visibility erases transgender communities, communities of color, and lesbian and bisexual communities that neither benefit from the associated respectability nor the gender/race/sexuality/class privileges. Likewise, the argument that visibility of violence will compel action presumes that all members of the GLBTQ communities and all neighborhoods are afforded equal levels of humanity and care. The illegibility of pain and innocence for certain communities highlights the limitations of this approach.

Dr. Hanhardt not only documents these discursive articulations but how these racial, class, and gender lenses shape the “understandings of the roots of, and remedy for, misogynist, racist and anti-LGBT violence” (158). The racialized and gendered understandings contribute to certain remedies and activists agenda that ultimately replicate inequality and state violence engendered throughout contemporary America.

The focus on ideology and activist framing extends beyond a discussed of the deployed rhetoric embraced by mainstream GLBT civil rights groups but is evident in the embrace of hegemonic understandings of safety, neighborhood, community, quality of life, and crime. In this context, Dr. Hanhardt highlights the consequences of the focus on violence (indexed through black bodies, through the conflation of street crime and antigay violence – the “bashers and the criminals” ) in terms of policy and activist initiatives that have privileged protected “gay neighborhoods” (p. 225) and heightened police activity. These choices, and political maneuvers not only shape the activities initiated by these groups (which issues; where) but also elicit consent for state and neoliberal activities that run counter to the needs of communities of color, the poor, and youth (and this includes GLBTQ communities of color). “The establishment of protected gay territories and the identification of anti-LGBT violence as a designated criminal category – must be paired with two of global capital’s own ‘spatial fixes’: gentrification and mass imprisonment” (14).

While much of the book reflects on the ways that GLBT civil rights activism colludes with the projects of transnational capitalism and its racial/gender/class logics, Safe Space is equally invested in spotlighting spaces and movements of contestations. Offering ample examples of GLBT organizations that sought to challenge the mainstream rhetoric and policy initiatives, Dr. Hanhardt speaks to the contested spaces. Here, Dr. Hanhardt’s powerful discussion and her analysis FIERCE reminds me of the work of Critical Resistance and how demands for complicated and intersectional discussions of safety and security have been central to activists movements in recent years:

Safe Space advances these important conversations in powerful ways, offering theoretical frameworks, historic context, critical interventions, and the language for not only reflecting on these movements and the deployed rhetoric but also enacting research in the name of freedom dreams. Dr. Hanhardt “asserts that mainstream and LGBT discourse has substantially transformed the category of anti-LGBT from the social to the criminological, and that this shift was grounded in privatized claims in neighborhood, the process was neither foretold nor total” (9) – this history continues to be written and the future continues to be contested. With Safe Space, Dr. Christina Hanhardt reveals the level of debate and struggle, providing readers with the necessary historic insight, theoretical templates, and tools to best understand these dynamic movements of change all while empowering in the persistent march toward equity and empowerment – safety – across communities and boundaries, from Islan Nettles to Matthew Sheppard.