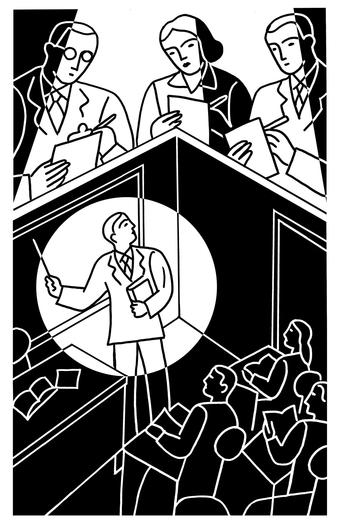 Amid the rightful discussion of our shift toward an entrenched, disposable academic laboring class, some adjunct advocates are making a striking analogy. Adjunct labor, they say, is a form of new slavery.

The comparison has become increasingly visible on blogs and within comment sections. Here’s one more example, from Langston Snodgrass: “It has been said that, ‘Adjuncts are the slave labor of higher education.’ This is factually true beyond doubt. Adjuncts are disrespected as teachers, as individual human beings, and as professionals in terms of what adjuncts are paid.”

So let’s be clear about this: Adjuncts are not slaves, and being an adjunct is not akin to slavery. Exploitation? In many cases, yes. Slavery? Absolutely not.

Slavery was (and continues to be) a system of forced labor, of lifelong servitude, of denied compensation and violence. Those who deploy the term as part of a rhetorical strategy are joining PETA, anti-choice crusaders, the G.O.P., Sarah Palin, Ben Carson, and a myriad of anti-Obamacareites by doing so. They are blinded by their cause, by historic myopia, and often by the privilege of whiteness.

Throughout history, slavery has been embedded within society. It has governed law, economic and political structures, and everyday realities. White supremacy has been a guiding ideology, a way to rationalize the exploitation and violence experienced by enslaved African and African-American people. Daily abuse, torture, sexual violence, and death have all been part of a system of slavery in the United States, and terror and violence were instrumental in maintaining a system of mass enslavement.

“Slavery for Black Americans was traumatic,” noted Patricia Moody Jefferson, a doctoral student in the Ethelyn R. Strong School of Social Work at Norfolk State University, during a recent discussion I participated in on Facebook. “Children and whole families were sold like animals. People, human beings were killed. Africans who were enslaved lost much of their identity.”

It should go without saying that being an adjunct is nothing like this.