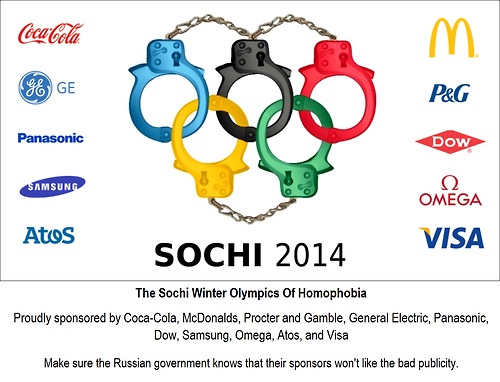 The upcoming Sochi Olympics are already shrouded in violence and inequality. It is the Olympics after all, so the political, social, and cultural entanglements between the world’s largest sporting spectacle and the broader social realities (injustices) are nothing new. Yet, with the Olympics just over the horizon, 2014 will spotlight the ongoing oppression facing GLBTQ communities and their allies in Russia (and beyond).

As with U.S. outrage over racism within European fútbol or “hooliganism” in the world’s most popular game, the national response to Russian state-sanctioned homophobia has been wrapped in a narrative of American exceptionalism. More than the rightful condemnation, the calls for a boycott of the Sochi Winter Olympics speak to a level of holier-than-thou exceptionalism that locates evil, hatred, and violence elsewhere, all while seeing goodness, love, and equality in the hearts and minds of people in the United States.

Don’t get me wrong: the anti-GLBTQ violence in Russia mandates protest and widespread censure. The Sochi Olympics are an opportune moment, but not because of a dehistoricized and naïve understanding of the Olympics as the apolitical celebration of the world’s humanity. Nor is Sochi an important space of intervention because homophobia and inequality run counter to the Olympic charter and its call for nations to put aside differences in a celebration of friendly athletic competition. I know these messages are what NBC and the International Olympic Committee are selling, but I ain’t buying.

At the core, the Olympics are about Western hegemony – a celebration of colonization and imperialism. Christina Ting Kwauk notes,

According to John Bale and Mike Cronin, modern sport is a legacy of colonialism. It is a product of the implantation of sport by Western colonizers into societies all over the globe in an effort to civilize the “savages” in the image of the Englishman. Bale and Cronin argue that although “modern sport may serve to promote the modern post-colonial state, they initially served as a form of colonial social control.” Through sport, colonialists could first train the body and then capture the mind.

White supremacy, misogyny, and homophobia, not too mention the violence and destructive logics of capitalism, have always been core to colonial projects and thus are central to understanding the history of the Olympics. The anti-GLBTQ violence is thus not out of step with the history of the games. To deny this broader history is a mistake and a shortcoming given the complicity of everyone from the IOC to the Olympics corporate sponsors.

And yet, the Olympics do provide a platform for resistance. “But this year’s Winter Olympics offer us all an opportunity to look beyond sports and athletics and focus on the ways that sports can often highlight and intersect with human oppression,” writes Wade Davis II. “As we move closer to the 2014 Olympics, the oppression and violence directed towards LGBTQ individuals in Russia takes center stage, alongside the determination of who’s the world’s best in various sports.” Whether challenging Russia’s discrimination laws, U.S. drone strikes in Pakistan, #every28hours, or transnational sweatshops, the Olympics provide a powerful space of opposition.