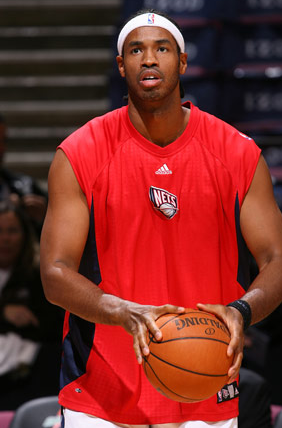 One of the time honored recent traditions within NBA media culture is the television shot of a players’ partner nervously watching “her man” on the court. Often deployed during the playoffs, this gaze adds to both the humanity and importance of the game. With Kobe Bryant, especially in the aftermath of Colorado, his kissing of his partner and his kids as he walked to the locker room served as an important moment to humanize him within the heteronormative (and marriage obsessed) imagination.

Jason Collins’ announcement hopefully paves a pathway where he or others can kiss their partner during halftime; his announcement hopefully marks a moment where a national television audience can bare witness to a nervous, anxious, and adoring male partner supporting his man. The reserved privilege for heterosexuals within the NBA has been challenged with the announcement. As was the denied ability for these players/men/ national role models to be themselves, to be visible amid the uber visible world of American sports. Saeed Jones made this clear:

Add to this that in a world where a narrow construction of masculinity, defined by physicality, (hetero)sexuality, and brutality is both celebrated and required, one hopes that Collins’ announcement opens up this space where simultaneously deconstructing the vary assumptions that have resulted in the “masculinity box.”

Yet, its bigger than Jason Collins.

One has to wonder how many homophobic and racist jokes were cracked in America’s dorms and boardrooms while we celebrating “progress.” Clearly Jason Collins’ announcement did not mark the end of homophobia or usher in a new era on twitter. In the end, Jason Collins’ announcement highlights the importance TO CONTINUE to combat bigotry, institutional discrimination, and systemic generated privilege. It doesn’t mark the end of struggle.