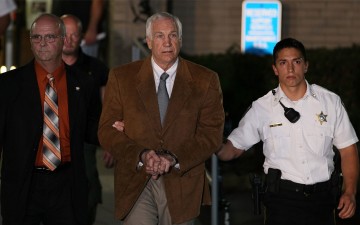 Amid all the self-righteousness and demands for accountability, justice and changes are the realities that speak to a societal disregard for the injustice of child abuse. Clearly, Penn State, a culture of hero worship, and most specifically those who turned their back on Jerry Sandusky’s victims in the name of bowl victories and football tradition, are complicit. Dollars and wins were deemed more important than the safety of children, an indictment of many.

We can all point to the various enablers within Penn State – administration, the Board of Trustees, Joe Paterno and countless others. Yet, the NCAA and the sports media, which not only promote a culture of football, a “victory culture,” and a “win by any means necessary” are also complicit here. They provided the incentive, the financial remunerations, and the institutional support that gave rise to this tragedy. Did what the NCAA did today make kids any safer; did it change the culture of college sports; did it adjust societal priorities; did it change the ways we define heroes. The plague of child abuse necessitates systemic action, including budgetary support for the prevention of child abuse; it requires financial commitment that actually puts kids first, that cares for those who have faced the unthinkable injustice for child abuse. As the NCAA wags its finger at Penn State and as ESPN and others in the sports media congratulate them, I am left to wonder who will hold the American political structure accountable for making kids more vulnerable.

If we as a society are truly concerned about child abuse, lets put our money where our mouth is. Instead of purchasing tickets for one game, instead of donating to our favorite athletic program, instead of donating to politicians who vote against the interest of children, instead of forking over $$ for the latest game gear, lets make our priorities clear with some investment in those actually promoting justice.