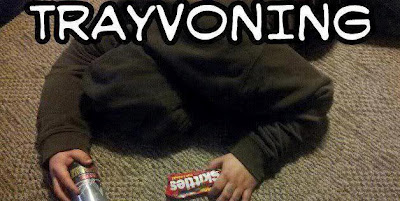 The Trayvoning Meme & the Mocking of Black Death

The more things change, the more they stay the same. While new media and social networking is “transforming” our society, in certain ways, bringing people closer together, if only seemingly so, its “newness” seems only relative to its potential as a new frontier in which to deploy and recycle the same old narratives and tropes, to continue a history of injustices that define the American experience. As the technologies of communication appear new, the technologies of oppression are anything but. However, as we see with “Trayvoning,” the trend that has White youth posting pictures of themselves as if they were part of the Trayvon crime scene, the marriage of communication innovation with racist stagnation does constitute something new, though not improved, in the history of the system of racism in the United States.

“’Trayvoning’ is when you get a hoodie, Skittles and Arizona iced tea, and pose like you’ve been shot in the chest.” The Facebook page instructs participants in go through the following steps:

Trayvon Martin was a 17-year-old African American male who was unarmed and got shot by a raciest [sic] Mexican American.

During Step 7, participants are instructed to post their pictures on the Internet, which has led to widespread circulation of these disgusting and dehumanizing images.

In response to reports about “Trayvoning,” Jasiri X asked on Twitter: “Trayvoning? Really? Why is our pain, suffering & death, always mocked for laughs?” This question gets to the heart of not only the efforts to recreate and disseminate representations of the Trayvon case, but it is also a means to communicate pleasure in the murder of Trayvon. “Trayvoning” recasts and performs injustice by turning someone’s pain and suffering into a spectacle of white pleasure that further denies the humanity of black people. This is reflected not just in “Trayvoning” but with the Orlando businessman who has sought to capitalize by selling Trayvon shooting targets, the media that continues to criminalize and blame Trayvon, and those who have disparaged, mocked (see here for picture of someone who donned blackface), and made light of a dead young man.

The disregard for Black life, and the disparagement of Black death is nothing new; the pleasure and joy garnered from Black suffering and dreams deferred has been central to White supremacy throughout United States history. Evident in minstrel shows, the history of lynching, and jokes about racial profiling or the war on drugs, whites have always found joy in the violence experienced by African Americans.

The history of American public discourse is one marred with both the erasure of black and suffering, and efforts to find happiness and pleasure in the suffering of the OTHER. We saw this during Hurricane Katrina where the sight of African Americans wading through water in search of food or medicine, or stranded families clinging to life on roof tops elicited reactions of shock and horror as well as pleasure and joy at the knowledge that could never happen to White America. Dylan Rodriguez describes Katrina as a “scene of white popular enjoyment, wherein the purging/drowning of black people provided an opportunity for white Americana to revel in its entitlement to remain relatively indifferent to this nearby theater of breathtaking devastation.”

Such joy isn’t simply an outgrowth of the denied humanity of Black people or the refusal to witness and see Black pain, but it is also a celebration of, or at least the solidification of, White humanity, White power, and the protective armor that whiteness provides each and every day. This is the story of race in America, from lynchings to Katrina, from slavery to Trayvon Martin.

But the examples of racialized disregard that have surrounded Trayvon Martin’s death, most recently exemplified in the commodification and “meme-ification” of the tragedy by various White people. This marks a startling new mechanization of racism wherein there has been a complete evacuation of humanity…on both sides, that of people of color and other marginalized groups, the dehumanization of which is, sadly, no longer surprising, but also that of dominant groups who willfully participate in acts of oppression like “Trayvoning” whose humanity becomes increasingly and insidiously taken over by consumption and performance. The joy historically, as well as contemporaneously, taken by many Whites in the violence against and suffering of African Americans has become nearly indistinguishable from the joy of consuming.