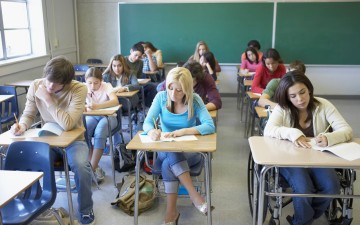 Recent months have seen a wave of campus racism at America’s colleges and universities, including Fordham University, University of Wisconsin-Madison, Cornell University, Northwestern University, and the Ohio State University. While racism is as commonplace at America’s “liberal” training grounds as binge drinking, I found myself wondering about occupying America’s universities. I found myself wondering how Black studies and ethnic studies have the potential to change America’s racial path. How Black studies and understanding the ongoing history of racism is essential to a quest for a “more perfect union.”

Imagine if every student took at least one Black studies course per year during college alongside of Chicano Studies, Asian American Studies and Native American Studies. What if students, what if white students, starting in kindergarten and through graduate school, American’s future leaders, teachers, and voters learned a 4th R – racism – alongside ‘reading, ‘riting and ‘rithmetic? Surely institutional racism would remain an obstacle, but Whites who inhabit those institutions, from the classroom to the Capital, would likely be changed.

Learning about minstrelsy and the history of racist imagery would surely impact the decision from White students to don blackface for the sake of fun, parties and Halloween. Learning about the history of slavery and lynchings would hopefully encourage thought from entire communities the next time a noose appeared on campus, the next time someone scrawled lynch on a chalkboard or dorm room door. There would be no more excuses and claims of ignorance about these histories.

Can we imagine a world where White students didn’t commonly use the “N-word” behind closed doors because they understood the history of racial violence? Would the hurling of racist jokes and epithets lessened as all students began to think about the consequences and daily harm? Would the exposure to alternative perspectives, to unseen history, and to conversations with students of color, change those students? I would hope so.

Through knowledge, critical thinking and dialogue, colleges can transform themselves–and their students. According to Howard J. Ehrlich, director of The Prejudice Institute, between 850,000 and one million students (roughly 25 percent of students of color and five percent of White students) experience racially and ethnically-based violence (name calling, verbal aggression, harassing phone calls and “other forms of psychological intimidation”) each year. What if each of the students who hurled the slurs at Cornell or graffitied “Long live Zimmerman” at the Ohio State University taken a Black studies course surely there worldview would have been different. Surely, those White students who sat idly by, who watched and said nothing, would have challenge their peers had they any real knowledge of race and racism.

Knowledge about Black culture, history, and identity would come not from Basketball Wives or The Help but in James Baldwin and Tayari Jones, Daughters of the Dust and Killer of Sheep.

Yet, the need for a world of Black Studies as multi-year required isn’t simply to teach White students about prejudice, but the erased experiences and voices of Black people. Knowledge about Black culture, history, and identity would come not from Basketball Wives or The Help but in James Baldwin and Tayari Jones, Daughters of the Dust and Killer of Sheep. We would no longer hear about Martin Luther King’s dream of colorblindness, but instead his dream of justice, reparations, and equality of outcome. The civil rights movement would be a history told not through King and one great speech, but people like Bayard Rustin and Ella Baker, heroes and sheroes who refused to accept American Apartheid. This is my dream, a dream where White students learn alongside of students of color about the history of racism, about privilege, and inequality; about the contributions and humanity of communities of color; about histories of resistance from “Aint I a woman?” to “Let freedom ring.”

While a freshman at the University of Oregon, I took my first African American history class. This class and so many others changed my life. Beyond learning about African American history, beyond reading the likes of DuBois, Frederick Douglas and Carter G. Woodson, beyond hearing for the first time names like Turner, Garvey, Delany, and Hamer, I learned to think for myself, asking why wasn’t I learning this history and what does it mean that the history, literature, and culture I learned during my formative years was a story of whites.