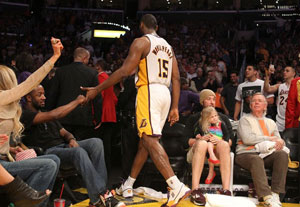 Condemn The Foul, Not The Mind

Leave the mental assessments for professionals.

There is no defense for the elbow seen around the world. Metta, why? Irrespective of intent, it was a hard flagrant foul, one that has no place in the beautiful game of basketball. The seven-game suspension, while a bit on the high side, is measured and appropriate.

In fact, given the incendiary rhetoric from the media, the continuous loop of the incident, and their overall efforts to excite anger, the decision from David Stern to issue a sensible suspension (not the case with the Palace Brawl) is worthy of praise.

As such, there is nothing to debate regarding Metta World Peace elbowing James Harden in the head—it was vicious, uncalled for and disheartening. As a Lakers, Metta World Peace and basketball fan—it was disappointing. It is indefensible; yet, that fact is not a defense for a media spectacle-defined unnecessary cheap shots, much of which has nothing to do with the incident.

From the hyperbole and rhetoric designed to incite anger, to the constant invoking of the language of the criminal justice system and the demonization of Metta as a crazy person, much of the sports media has failed to inform and elevate the discussion, instead embracing roles as referee, commissioner and worse yet, doctor.

A common theme evident since the nationally televised elbow has been the constant mention of Metta’s mental state. While one might think mental illness mitigates culpability (it can within our justice system), the media establishment has used his purported mental fabric and wiring as part of a narrative that depicts him as pathological and dangerous. Although painting him as unstable and mentally weak, the ubiquitous references to his mind reflect an effort to mock, make fun and ridicule Metta World Peace.

The references have saturated the airwaves. “To say that something is wrong with Artest would not do him justice. This is the guy who applied for a job at Circuit City to get a discount, has come to practice in a bath robe and has admitted to drinking cognac at halftime,” writes Jason Black. “After winning the NBA Championship in 2010 he thanked his psychiatrist. There are many people who need therapy or have mental health disorders, so the fact that he publicly talked about having a psychiatrist isn’t a bad thing, but it tells us there is a problem.”

Black goes onto argue that Metta’s mental illness represents a threat to himself, other players and the game itself, calling for extensive punishment as a method of protection: “Having a mental health issue and getting help for it is commendable, but what price does somebody have to pay before it’s too late?” As with media pundits like Stephen A. Smith, who described Metta as “not that far away from coo-coo nest,” “as touched,” and as someone who has refused to take his medication in the past, the media narrative demonizes Metta for his mental issues.

Describing him as having “violent tendencies,” Bill Plaschke furthers the picture of MWP as psychopath, as crazy dangerous man: “This was about a celebration that turned caustic when somebody walked into the middle of it, the weird mind of World Peace switching from jubilation to rage in a matter of seconds. Maybe even scarier than the elbow was the look in his wild and crazy eyes as he stalked around the floor immediately afterward.”

Continue reading @ SLAM ONLINE | » Condemn The Foul, Not The Mind.