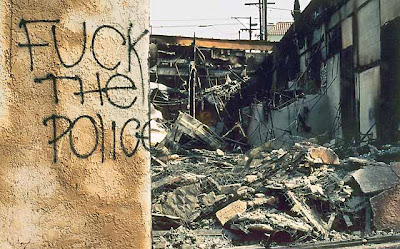 Can We All…Get It Right?: Remembering the LA Uprising

There are few days in life where you can say without a doubt, “I know what I was doing 20 years ago today.” This is the case today, on the 20th anniversary of the start of the Los Angeles Uprising.

Having dropped out of the University of Oregon after 2 quarters, I was living in Los Angeles working and taking two classes at UCLA. Like many middle-class white youth I presume, I paused when the verdict was delivered and noted the injustice that spurred my outrage before getting back to my life. I was angry, like many others, because a jury of THEIR peers concluded that 4 police officers did nothing wrong in beating Rodney King 56 times, but the anger lasted only for that second. That was the reaction from many in West Los Angeles. “That’s outrageous, can I get a cold beverage”; “what an injustice, is the mall open yet?”

I remember thinking little about the case after hearing the verdict,. I headed to work and then to my class at UCLA. Driving to my class, through the wealth of West Los Angeles, all was calm. Entering class, an introduction to sociology course that focused on inequality systemic racism and privileges, it was clear that the verdict changed little. Class was planned as usual. Yet, before long, with news reports of violence breaking out in South Central, Los Angeles, our professor announced the end of class out of concern for OUR safety. In a city immensely segregated, defined by systemic divisions that thwart interaction all while enacting violence on its residents of color, it is immensely telling that the Rodney King Verdicts/LA Uprisings became meaningful, if not visible, when people thought the riots were going to cross La Brea or other markers dividing the two LAs.

For the rest of that night and next day, I was paralyzed, watching television almost endlessly. In retrospect, for myself, and maybe others, the LA Uprising put a crack in the walls of segregation. Although living less than 15 minutes from South Central, Los Angeles, it might as well have been 10,000 miles away. That is the specter of segregation in Los Angeles. Even the media reporting then, and the ways that the verdicts and LA Uprising were being talked about demonstrated this fact as people continued to talk about what was happening “over there” concerned that it might “migrate here.” I was uncomfortable with the detached feeling paralyzing me so I decided to leave the state-protected bubble of West Los Angeles and I drove down to South Central on day 2 to donate some food, clothes, and stuffed animals to the First AME Church.

I was most certainly driven by my desire “to help,” as I imagined what that meant twenty years ago, which most certainly reflected my white privileged understanding of privilege. Yet, I was also angered by the clear segregation of Los Angeles, not only in terms of geography, economics, and daily reality, but sentimentality and emotion.

The lack of sadness and anger within West Los Angeles was telling because the LA Uprising was not happening in our world; it was somewhere else, happening to someone who didn’t look like “us.” The power of race and class in eliciting not only empathy and connection, but also sentimentality and humanity, was on full-display in the days after the King Verdict. When I told people that I was heading down to South Central, they looked at me like I was crazy, as if I was driving into a foreign land amid a war. To them, it was a foreign land, one that they neither visited nor thought about except in moments of fear (“will the rioters come to the West Side) or heading to Lakers’ games. Despite voiced concerns about my driving just a few miles down the 10 Freeway, it was rather “uneventful” except in how this moment transformed me.

The drive forced me to reflect on my own assumptions and stereotypes, to think about why neighborhoods so close to my own were places I had never been (and thought of as so far away); it forced me to think about the violence and destruction that predated April 29th and bare witness to communities that West Los Angeles had abandoned; and finally, it forced me to reflect on the power of community, to see beyond the televisual representation of South Central Los Angeles rioting, to see families collecting food, kids playing, and people coming together. It forced me to look inward, to think about whiteness and privilege, to reflect on my stereotypes and assumptions. Even my ability to get my car and drive to South Central Los Angeles is evidence of privilege given the levels of state violence experienced by black and Latino youth entering LA’s white enclaves in West Los Angeles. What should have been a moment of introspection, of racial reconciliation and systemic change, instead became a moment, one that too many of us retreated as we are driving back to the “comfort” of a gated community.

Continue reading @ NewBlackMan: Can We All…Get It Right?: Remembering the LA Uprising.