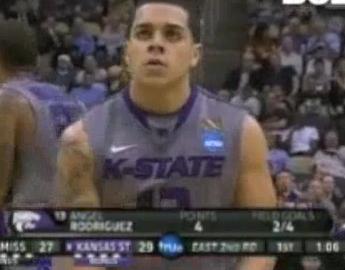 Ballers, Political Shot Callers and the ‘Show Your Papers’ Movement

An outbreak of racist taunts continues to be a problem at NCAA basketball games.

The past month has witnessed a series of racist cheers at sporting events. Fans at a University of Minnesota at Duluth mocked the visiting University of North Dakota hockey team, jeering “Small Pox Blankets”—a chant that belittles the school and Native Americans through a reference to its mascot, which converts the reality of genocide into a sporting smack down. In Pittsburgh, during a recent basketball game, fans (as well as players) from Brentwood High hurled racial epithets at Monessen High players. Three fans dressed banana costumes surrounding the primarily black Monessen team, as the left for the locker at halftime, yelling epithets while making monkey noises. Some parents reported that members of the Brentwood squad joined in, calling its opponent, “monkeys and cotton pickers.”

More recently, students at the predominantly white Alamo Heights High School celebrated the defeat of the largely Latino Edison High School with a chant of “USA, USA!” So, it was little surprise in the round of 64, members of the pep band from the University of Southern Mississippi (USM) yelled, “Where’s your green card?” at Kansas State University freshman Angel Rodriguez (who was born in Puerto Rico) as he took foul shoots.

Administrators were quick to apologize following each transgression, offering some variant on the standard refrain: we regret any offense…this is not us…we are not racist…we will take appropriate action. And to be fair, these chants are brief, spontaneous, and passing utterances. They lack sanction and surely do not represent the image that these schools hope to project. Their apologies to the contrary, in an historic moment marked by the rhetoric of color blindness, but not the alleviation of structural racism, the eruption of overt bias, particularly in the guise of clichéd hate speech and “jokes,” far from being abnormal actually reveals the norm, offering keen insights into historically white institutions and the persistence of white supremacy.

While taunting a fellow American citizen by inquiring about his green card exposes great ignorance (Puerto Ricans are US citizens and have been since 1917) and reflects deep antipathy toward Latinos, it is actually in keeping with the history of the University of Southern Mississippi (and countless other colleges and other universities). In fact, USM epitomizes the arc of white supremacy in college sport. Founded in 1910 as an institution devoted to training teachers, USM was like most peers in the South segregated. And like many other public spaces in the USA, students at USM were enamored with Indianness, despite (or perhaps because of) the historic removal of embodied Indians to make way for settler society in southern Mississippi. They choose Neka Camon, “a Native American term meaning ‘The New Spirit’,” as the title for the school’s yearbook. Later, the student body opted to formalize the moniker of the sport teams, selecting the Confederates in 1940. A year later, a slight modification, the Southerners, was substituted. Although in light of the better known history of Ole Miss, this is not surprising, the mascot chosen for athletics a decade later is: USM did not name an anonymous rebel or plantation owner; no, it enshrined Natan Bedford Forest, the infamous leader of the Ku Klux Klan, as its mascot. Desegregated in 1965, USM changed its moniker and mascot to the Golden Eagles in 1972. USM is a quintessential institution of higher learning: historically white, segregated, playing Indian, and celebrating the Confederacy in defiance of the civil rights movement.

The jeer from members of the pep squad (or band) also suggests that USM remains typical, and, despite protestations from administrators, that what is chanted at a basketball game says much about the social landscape of Mississippi today and much about all of us today.

The students chanting, “where’s your green card” were not alone this day, with the state’s politicians legislatively demanding the same of Latinos throughout the state of Mississippi. The state’s House of Representatives passed the “Support Our Law Enforcement and Safe Neighborhood Act,” a copycat bill to Arizona’s anti-immigrant legislation. Among other things, the bill mandates the police verify immigration status for any person arrested

One thought on “SLAM ONLINE | » Ballers, Political Shot Callers and the ‘Show Your Papers’ Movement”