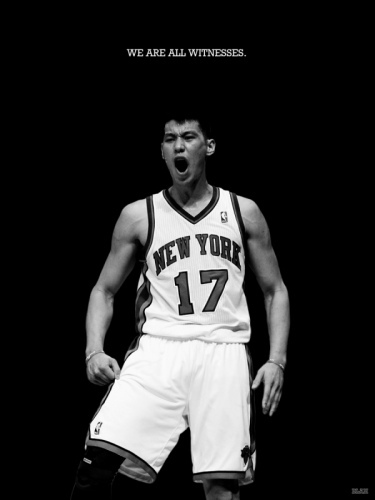 Among the virtual saturation of Jeremy Lin online has been a poster of him with the words “We are all witnesses.” At Monday’s New York Knicks game, fans donned “black T-shirts that read “The Jeremy Lin Show” on the front” and “We Believe” painted on the back.

Encapsulating the hoopla and hype, while referencing the similar promise that LeBron James brought to Cleveland and the NBA (how’d that work out?), not to mention the spectacle of his meteoric rise, “the witness” iteration illustrates the religious overtones playing through the media coverage.

Since Lin emerged on the national scene while at Harvard, he has made his faith and religious identity quite clear. While refusing to abandon the “underdog” story, Cork Gaines focuses readers attention on his religious beliefs: “But there is more to Jeremy Lin than just being an undrafted Asian-American point guard out of Harvard. He is also a devout Christian that has previously declared that he plays for the glory of God and someday hopes to be a pastor.” Noting how post-game interviews often begin with Lin announcing his faith – “just very thankful to Jesus Christ, [his] Lord and savior” – Gaines uses this opportunity to deploy the often noted comparison that Jeremy Lin is the NBA’s Tim Tebow.

While making the comparison through the Cinderella/overlooked narrative, the media celebration of their faith and evangelical beliefs serves as the anchor for the Lin as Tebow trope. “Tebowmania? That was so 2011. It’s time for a new cult-hero phenomenon: Linsanity,” writes Ben Cohen in “Meet Jeremy Lin, the new Tim Tebow.”

Then there’s their shared religious values. ‘I’m just thankful to God for this opportunity,’ Lin said in an on-court interview Saturday before tweeting, “God is good during our ups and our downs!” His Twitter avatar is a Jesus cartoon. Tebow’s, for the record, is his autobiography’s cover.

Described as Taiwanese Tim Tebow, as resembling “Denver Broncos Quarterback Tim Tebow,” as filling the mold that Tebow “patented,” Lin’s identity (meaning/significance) is ascribed by his connection to Tebow. Tebow defines him.

In “From Unknown To Phenom In 3 Games: Harvard Grad Jeremy Lin Saves The New York Knicks,” Les Carpenter makes the comparison clear: “He is a Christian, vocal in his belief. And because of this and because he is a flawed player proving the experts wrong, people are comparing him to Tim Tebow.” According to Gaines, “Lin and Tebow are not the first athletes to make their faith a key component of their athletic persona. But if Lin, another unconventional player fighting an uphill battle against haters and doubters, continues his spectacular play in The World’s Most Famous Arena, the NBA may soon experience their own Tebowmania. And the fans are already calling it “Linsanity.”

While dismissing the links beyond the uber-hype afforded to Tebow (and now Lin), Bethlehem Shoals furthers the comparison: “Tim Tebow, whose religious views are no secret, probably considers luck the pay-off for faith; Lin is also an enthusiastic Christian. Whether you feel like pushing things in that direction is your business. The bottom line is that, thus far, Lin has been a welcome surprise, a Cinderella story that no one wants to see end.”

The comparison is instructive on multiple levels (see here to understand problems with comparison in a sporting context). Each exists in juxtaposition to blackness. The “underdog” narrative, the focus on hard work and intelligence, and the claims of being overlooked and discriminated against all elucidates the ways in which their bodies are rendered as different from the hegemonic black athletic body.

Religion, thus, becomes another marker of difference, as a means to celebrate and differentiate Lin and Tebow. Whereas black athletes are seen within the national imagination to be guided by hip-hop values rather than religious values, Lin and Tebow practice an evangelical ethic on and off the field/court. Tebow and Lin operate as “breath of fresh air.” Writing about Tiger Woods in Sports Stars: The Cultural Politics Of Sporting Celebrity, C.L. Cole and David L. Andrews argue that Woods’ emergence as a global icon reflected his power as a counter narrative. As “a breath of fresh of air,” his cultural power emanated from his juxtaposition to “African American professional basketball players who are routinely depicted in the popular media as selfish, insufferable, and morally reprehensible.”

Continue reading at The God Squad: Tim Tebow, Jeremy Lin, And Religiosity Of Sports | Racialicious – the intersection of race and pop culture.