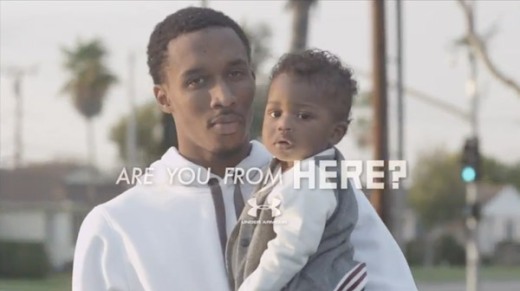 Are You From Here?

As part of its efforts to expand its market share, and make inroads with basketball players in America’s inner cities, Under Armour recently launched its “Are you from here?” campaign.

Pairing commercials with exhibition basketball games in various American cities, Under Armour embraced a grassroots marketing strategy: “While established brands are able to market globally with ease, Under Armour is building from the ground up using unique grassroots schemes to become a player in the ultra competitive world of basketball endorsement,” writes Peter Walsh in Slam Magazine. Walsh goes on to add, “With this strategy, Under Armour is hopeful that they will be able to build relationships with younger players and fans to build for the future as their popularity continues to grow.” Featuring Kemba Walker, Brandon Jennings, and Derrick Williams, these commercials theoretically introduce the future generation of consumers to the future of the NBA. While the NBA lockout limited the exposure and visibility of these commercials, now that the season is in full swing and the campaign is getting a second life, it is worth noting the interesting representations of race, class, and basketball simmering in these ads.

These commercials reify the dominant narrative that most NBA players grew-up in inner-city communities. While this fiction continues to hold sway, in reality a majority of NBA players spent their formative years in suburban and outer-burban neighborhoods. It is more convenient and potentially lucrative to portray NBA players emanating “straight-out-of Compton,” Chicago’s Southside, Coney Island, Oakland, or Harlem. To wit Under Armour’s commercials are laced with shots of metal fences, graffiti and other signifiers of urban life play upon the hegemonic visual signifiers of blackness, urbanity, and the NBA.

The commercial featuring Kemba Walker for example features him saying, I “grew up in the projects” a place “where every kid dreams about winning.” Likewise, the one featuring Brandon Jennings, with countless visual representations of Compton and the urban streets of Los Angeles, has him saying, the “streets are filled with chance and choice and always one move from losing it all.” According to Kemba Walker, “We’re just trying to show our faces in the communities man, we hood guys.”

Imagining America’s inner-cities as spaces of violence and opportunity, as space of despair and play, these commercial erase the complex experiences of urban America. Historian Robin D.G. Kelley in discussion of media representation of street ball elucidates the harmful messages delivered here. Commercials such as “Are you from here?” “romanticize the crumbling urban spaces in which African American youth play.” Such “representations… are quite remarkable; marked by chain-link fences, concrete playgrounds, bent and rusted nettles hoops, graffiti-scrawled walls, and empty buildings, they have created a world where young black males do nothing but play.”

continue reading @ The Layup Line » Are You From Here?.