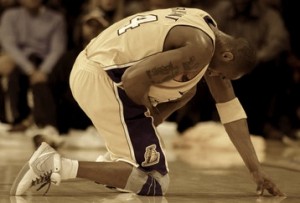 In a much-hyped preseason game between the Los Angeles Lakers and their cross-the-hall “rivals,” the worst possible scenario confronted the 16-time NBA champion: Kobe Bryant was hurt. Falling awkwardly, Bryant tore the lunotriquetral ligament in his right wrist. Less than a week later, the New Jersey Nets announced that Brook Lopez broke his foot during the first half of their game with the New York Knicks. With the Lakers potentially losing a Bryant at full-strength, and the Nets likely without the services of Lopez for 4-6 weeks, the injuries are potentially devastating to both teams, particularly the Nets whose ability to trade for Dwight Howard will be severely limited with the loss of this cornerstone trade asset.

Yet, more than the impact on the respective teams, these injuries highlight both the potential consequences of the NBA’s lockout. While injuries are commonplace, a rushed preseason and a compressed training camp represent a threat to the physical wellbeing of the players themselves. Stephen Smith, in “Expert warns of NBA lockout-related injuries,” compares the injuries that came about as a result of the NFL with the potential with the 2011-2012 season. There, he quotes Timothy Hewett, who is Director of Research at The Ohio State University Medical Center’s Sports Medicine Department: “Extrapolate what we’ve seen in the NFL, and I could see in the NBA in the range of 2, 3, 4 times higher rates of injury. This could be a historic event, where we start to think, ‘Is there a potential for really putting players at risk by these legal wranglings?’”

As evident, the injury bug has not been limited to the league’s stars, with Darrell Author (out for the year), Stephen Curry, and Marcus Camby all facing significant injuries. Celtics forward Jeff Green will also have to sit out this season because of a heart ailment discovered during his preseason physical. There’s also the improbable case of Sacramento Kings forward Chuck Hayes who in the span of two weeks went from the brink of having to end his NBA career after he was released by the Kings because of a heart condition diagnosed during his initial physical, only to be resigned by the Kings when Hayes’ doctors concluded that his diagnosis was not as severe as earlier believed.

While unable to blame these injuries on the lockout, it is hard not to think about the connection. And as the Hayes situation reveals, an incident in years past that might have taken a month or so to resolve, appeared to have been hastily resolved in two weeks all in an effort to get the show on the road. Contrary to all the speculation about “Will Kobe Play on Sunday,” these injuries, the rush to push the lockout behind, and the determination to start the season on Christmas/NBC/National TV days all point to the central focus anywhere and everywhere except on the physical health of the NBA’s players.

These injuries also point to the absurdity of the league’s best effort to cultivate rivalries and to manipulate and change the rules to guarantee parity. David Stern is unable to veto the injuries of Bryant, Lopez, or Curry for basketball reasons; just as he wasn’t able to veto the injury of David Robinson in 1997, which ultimately led the Spurs to draft Tim Duncan. Success, rivalries, and dynasties all organically happen; they won’t be the result of the manipulation and rule shifting policies of the league.

via The Layup Line » Will Injuries Derail 2011 NBA Season?.