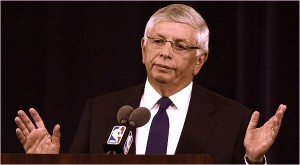 Time Magazine recently announced that its 2011 “person of the year” is the protestor. Highlighting the Arab Spring and the Occupy Wall Street movements, Time clearly sought to celebrate the ways in which protest and resistance has defined 2011. This spirit of protest was also been evident within the NBA in 2011. From the lockout to recent decisions from the league office regarding the trade of Chris Paul and even the 2011-2012 schedule, David Stern and the league’s owners have turned the levers of power over and over again. Yet, players, who in recent years, especially after the 2004 Palace Brawl (focus of my forthcoming book), have remained relatively silent about their frustrations and opposition to both policy changes and the overall culture of the NBA, are increasingly challenging those in position of power. Even as fans and pundits gleefully celebrate the return of the NBA and the prospect of their team finding success in 2011-2012, players have taken a different tone, ubiquitously stating, “enough is enough.”

The spirit of protest and anger was initially evident during the lockout when Dwyane Wade yelled at David Stern challenging the commissioner’s perceived arrogance and paternalism during a negotiating session. Wade allegedly told Stern: “You’re not pointing your finger at me. I’m not your child.” The willingness to challenge Stern and the owners themselves continued during the lockout, evident by the condemnation of Michael Jordan from players who felt slighted and disrespected by their former peer. This has continued since the lockout ended.

Upon hearing about the league’s (David Stern and his merry men) decision to block its own trade of Chris Paul to the Los Angeles Lakers for “basketball reasons” (err- Michael Jordan and Dan Gilbert are tired of going to the lottery while others go to parades), Danny Granger took to twitter to announce: “Due to the sabotaging of the LA/NO trade by david stern, and following in the footsteps of my athlete brethren Metta World Peace and Chad Ochocinco, I’m changing my last name to ‘Stern’s Bi#&h” #effectiveimmediately.’” While not as cutting and critical of the commissioner, other NBA players similarly used twitter to voice their displeasure with the situation. Unwilling to sit silently, they used social media to protest, albeit rhetorically, which in this case an important intervention against the demands that NBA players “shut up and play.”

Player denunciation of Stern was not limited to Twitter, but was equally present within various media sessions. “You’re fighting a bully,” noted Deron Williams. David Stern is a bully, you can’t really go up against him. He knows he’s a bully. It’s not a secret. You got to be. I think every owner of every big business is a bully. That’s how they become successful.”

Public criticisms has not been limited to the Chris Paul issue or even the lockout, but have been evident in player willingness to voice their displeasure with the upcoming schedule, focusing on the league and owner single-minded focus on revenues. “I think what you see, we’re a rushed league right now,” noted Kevin Garnett. “Everybody is paying attention to the Chris Paul situation. But I don’t know why everyone’s shocked, because [David] Stern has been pretty adamant about when he wants to do things and how he does things.”

There is a lot of uncertainty in the air within the NBA. From decisions in the league office to very dynamic and fluid player personnel issues, the NBA is facing the most unclear and unpredictable future it has seen in its recent history. Yet, what is equally unclear is whether players will continue to challenge and protests the unjust and troubling choices made by their powerful bosses, individuals who have shown to be most concerned about “financial reasons” above any “basketball reasons.”

via The Layup Line » Enough is Enough #Afterthelockout.