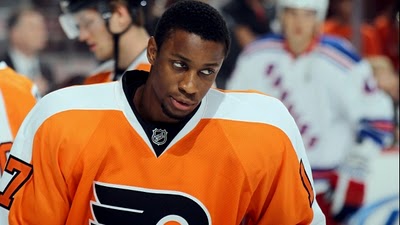 Bananas, the NHL, and the Rhetorics of White Racism

During a recent exhibition game between the Philadelphia Flyers and the Detroit Red Wings, the larger history of racism within NHL and society at large showed its ugly head. Held in London Ontario, a fan (or multiple fans) threw not one but two bananas at Wayne Simmonds. One of the flying bananas in fact reached the ice as Simmonds, one of 28 blacks playing in the NHL, skated in on the goalie during a shoot-out. “I don’t know if it had anything to do with the fact I’m black. I certainly hope not,” Simmonds noted. “When you’re black, you kind of expect (racist) things. You learn to deal with it. I guess it’s something I obviously have to deal with – being a black player playing a predominantly white sport.”

Others connected to the sport were not so willing (despite their having greater power and privilege) to reflect on the racial realities and hostilities of the NHL in this moment or elsewhere. While describing it as a “stupid and ignorant action,” Commissioner Gary Bettman made clear that incident was “in no way representative of our fans or the people of London, Ontario.” Maxine Talbot, a teammate of Simmonds, summarily dismissed the incident as “isolated” that said little about the state of hockey: “It’s not like there’s a problem with racism in our league. It’s one person!”

Dismissing it as an aberration and the work of some ignorant fans, the response fails to see the broader history of the NHL, not to mention the larger racial issues at work. While Bettman and others sought to isolate the incidence as the work of a single person who isn’t representative of hockey culture or society at large, others pointed to the persistence of racism within the NHL. Kevin Weeks, who had a banana thrown at him during the 2002 Stanley Cup Playoffs, noted his lack of surprise that Simmonds was subjected to such racism: “I’m not surprised. We have some people that still have their heads in the sand and some people that don’t necessarily want to evolve and aren’t necessarily all that comfortable with the fact that the game is evolving.”

Weeks is not alone here, with Glen McCurde, vice-president of membership service for Hockey Canada, contextualizing Simmonds’ experience within a larger tension that has resulted from the growing diversity of the NHL and Canada at large: “We recognize there’s a changing face of the population in Canada and hockey needs to change too. We need to change too. We need to ensure our programs are welcoming of all Canadians.” Yet, this instance (among others) illustrates that both hockey and Canada itself are imagined through and protected of whiteness. According to Peter Donnelly, the history of hockey is where “the sport has been comfortable in its whiteness. Reflecting on the larger history of racism in the NHL, Weeks, McCurdie, and Donnelly situate this moment within a broader milieu of racism.

The incident itself, the broader history of the NHL, and the frequent practice of fans throwing bananas at black soccer players within the European leagues (or the hurling of other racial epithets), however, was unconvincing to many of the commenters that appeared below the ESPN article. Focusing on the over sensitivity of African Americans, the lack of evidence of racial animus, and otherwise denying the importance of this incident through their insertion of “jokes” the collective reaction can be best described as both denial and dismal. In many ways the reaction to the sight of a fan throwing a banana at a black athlete mirror the type of responses that followed the reports about ASU fans donning blackface during a football game. These moments, as with other instances of everyday instances of racism, have not led to sustained dialogues about the persistence of racial violence within the public square or even efforts to eradicate the daily penetrations of racial hostilities, but instead efforts to isolate, deny, and dismiss, constructing these instances as minor issues at worst, one that has very little impact on society.

Such a callous and simplistic understanding of racism is on full display with Thomas Chatterton Williams’ The Atlantic piece, “Racism Without Racists?” Writing about Oprah Winfrey and other middle-class (or upper-middle class) African Americans who have spoke out against daily confrontations of individual prejudices and systemic racism, Williams seems to dismiss the significance of these moments, reducing them to trivial and minor moments of inconvenience. “The looming problem in black America is not that Oprah Winfrey can’t go to Hermès after hours or that Dr. Alexander is being overlooked. The point of real concern, it seems to me, ought to be the significant and growing class divide within the black community itself–the widening gap in opportunity and access that separates blacks who have educations and resources from those who do not. Offering a very narrow construction of racism that erases the connections and interdependence of racism,” Williams continues with his argument:

If we are fortunate enough to find ourselves in or near that first category, it is our ethical obligation not to forget the sacrifice it took for us to get there. Beyond that, though, it’s difficult to see what advantage can be gained trying to prove a negative or lamenting what cannot be known. And this much is certain: In a world where there’s racism, whether with or without racists, living well–as all of the people under consideration here are clearly doing–is, and always will be, the best and only revenge.

What is striking about his discussion here is the concerted efforts to isolate the micro-aggressions, the white racial frames that emanate throughout society, and the consequences of everyday racism. Individualize racism doesn’t exists in a vacuum but instead illustrates a larger history and ideological framework. A fan throwing a banana at a black player isn’t merely an affront to the player, an example of individualized racism, but a window into a larger history of racism inside and outside of hockey. It reflects the nature of white supremacy; it embodies the ways in which racism dehumanizes blackness and imagines black bodies as both pathological and savage.

To deny the importance of the systematic dehumanization of blackness, given its consequences, evidence by the state-sponsored murder of Troy Davis and the persistence of the war on drugs, is troubling. The everyday racism of white supremacy whether it be with fans throwing bananas, college students donning blackface or attending ghetto parties, or the dissemination of racist jokes and epithets, is violent itself; yet, at another level, the constant intrusion of dehumanizing rhetorics, representations, and behaviors contributes to a process where both equality and full citizenship for people of color remain a dream deferred.

In recent days, Wayne Simmonds has found himself under the spotlight again following accusations from Sean Avery that he used a “homophobic slur during the first period of the bitter preseason contest.”  Although the NHL was unable to confirm Avery’s accusation   (“since there are conflicting accounts of what transpired on the ice, we have been unable to substantiate with the necessary degree of certainty what was said and by whom. […] In light of this, we are unable at this time to take any disciplinary action with respect to last night’s events”) irrespective of Avery’s claims, video evidence showing Simmonds “hurling the epithet toward Avery” or Simmonds non-denial to the media, the incident should give us pause.  As Mark Anthony Neal noted on twitter (and thanks to @IyaOmotinuwe for raising this issue), it is the ultimate irony here.  Just as a tossed banana must be understood with a larger history and process of dehumanization, so does the language of homophobia.  Homophobic slurs perpetuate the denied humanity and rights afforded to members of the GLBT community.  In a statement to the NHL, Mike Thompson, acting president of GLAAD, made this clear:

Hate speech and anti-gay slurs have no place on the ice rink. The word that Simmonds used is the same word that is hurled at LGBT youth on the playground and in our schools, creating a climate of intolerance and hostility. He should not only apologize for this anti-gay outburst, but the Philadelphia Flyers and the NHL have a responsibility to take action and educate their fans about why this word is unacceptable.

A further irony and complication comes from the fact that Avery himself has been accused of racism, and more specifically that he uses racial slurs /epithets while on the ice (Alex Forlov, who made one accusation, subsequently backtracked).  All of this points to the larger issue of dehumanizing language and actions, all of which must thought of in relationship to large systems and ideologies that circumscribes equality and inclusion for all

via NewBlackMan: Dehumanized and Dismissed: Bananas, the NHL, and the Rhetorics of White Racism.