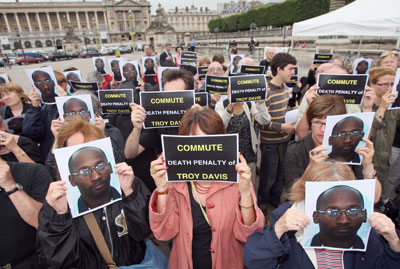 “Our Justice System at Its Worst”:

This week, Georgia announced its plans to carry out the execution of Troy Davis. While there remains time to thwart this miscarrying of justice, the planned execution should give pause to us all.

In absence of forensic evidence or a murder weapon, an all-white jury convicted Davis of the 1989 murder of a police officer in Savannah. The basis of the conviction was the witness testimony of nine individuals (7 eyewitnesses and 2 “jailhouse snitches”), many of who have subsequently spoken about police pressure. In fact, since his conviction, all but two of the prosecution’s non-police witnesses have recanted or contradicted their own testimonies, leaving the conviction in doubt. At the same time, 9 individuals have signed affidavits implicating another individual who happens to be one of the two witnesses who have not reversed on original testimony. Notwithstanding these significant doubts raised during the appeals process, one that has never allowed for his defense team to fully explore the recanting witness testimony, Davis’ conviction has remained, resulting in the issuing of his death warrant yesterday.

As part of its announced plan to stop the execution of Davis, the NAACP described the injustice in the following way: “This is our justice system at its very worst, and we are alive to witness it. There is just too much doubt.” Calling for people to take action to save Troy Davis’ life, his case points to larger racial issues that demand action as well.

His conviction and the decision to proceed with his execution should give pause given the research on race and witness identification. According to the Innocence Project, 75% of wrongful convictions overturned by DNA were the result of witness misidentification. “While eyewitness testimony can be persuasive evidence before a judge or jury, 30 years of strong social science research has proven that eyewitness identification is often unreliable” reports the Innocence Project. “Research shows that the human mind is not like a tape recorder; we neither record events exactly as we see them, nor recall them like a tape that has been rewound. Instead, witness memory is like any other evidence at a crime scene; it must be preserved carefully and retrieved methodically, or it can be contaminated.”

One of the sources of contamination is clearly race and the myriad of assumptions that result from an institutionalized system of stereotyping. In “Cross-Racial Identification Errors in Criminal Cases,” Sheri Lynn Johnson highlights the unreliable nature of “eye-witness” testimony, a fact that is exacerbated in cross-racial situations. Evidence from actual cases and in research studies elucidate the ways in which race and the larger social meanings attached to blackness play a significant role within the process of witness identification. In a study conducted with white students at University of Illinois and black students at Howard University, researchers showed them pictures of 10 white and 10 black individuals for a second and half; then, they were are asked to recall the pictures from a series of other photos. According to Elizabeth F. Loftus, in Eyewitness Testimony:

[T] he subjects were clearly better able to identify members of their own race. This study was later duplicated with the addition of Asian students. Again [African Americans] had greater difficulty recognizing faces of whites and Asians. Interestingly, however, whites and Asians had relatively little problem in identifying members of each other’s race – though both had trouble identifying [African Americans]. (from review of book)

The psychological obstacles facing witnesses along with the ways in which race further complicates the process is well documented. Yet, we continue to rely on witness testimony within the criminal justice system. The power of the white racial frame illustrates the reasonable doubt inherent in eyewitness testimony. In a society where black is akin to criminal, so much so that within the dominant imagination there exist a distinct category, the “criminalblackman” (Russell, 1998, p. 3), it is crucial to reflect on what is at stake with Troy Davis: his life and so many others.