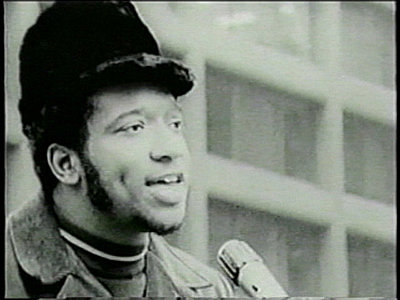 In the early morning of December 4, 1969, before dawn, the Chicago Police Department in conjunction with the Federal Bureau of Investigation—The FBI—riddled the residence of Black Panther Party leaders Fred Hampton and Mark Clark, killing them both. Hampton, who was sleeping in the back of the house with his pregnant girlfriend was unable to defend himself (he had been drugged by an informant), leading poet and Third World Press founder Haki Madhubuti (then Don L. Lee) to describe the incident as a “One Sided Shootout.” On that same day, Shawn Corey Carter—the maverick hip-hop mogul and artist—was born in the Bedford-Stuyvesant section of Brooklyn, NY. I can’t help but wonder what might have happened if these two—icons for two distinct generation of Black youth—might have ever had the chance to meet.

For those familiar with the legacy of Fred Hampton, simply known as Chairman Fred for many, Jay Z might seem the very antithesis of what Hampton represented. At the time of his assassination, Hampton was being prepared for national leadership within The Black Panther Party, which was decimated by incarceration (Huey P. Newton and Bobby Seale) and exile (Eldridge Cleaver). Hampton was 21-years-old, five years younger than Martin Luther King, Jr. was when he led the Montgomery Bus Boycott and the same age of Malcolm Little when he was when he began the prison sentence that transformed him into Malcolm X. Hampton was no ordinary young Black man.

According to historian Craig Ciccione, author of the forthcoming If I Die Before I Wake: The Assassination of Fred Hampton, “The threat was on the local level because on the local level the organizing was most effective.” Ciccone suggests that killing off local leadership could be achieved on a much quieter level—he notes that virtually none of the Panthers killed in the late 1960s were part of the national leadership.

Of those local leaders, Fred Hampton was perhaps the most significant—The FBI created a file on Hampton when he was just an 18-year-old high school student, who would shortly become leader of the Illinois Chapter of the Black Panther Party. Fred Hampton was a compelling figure because of his skills as an organizer—he was instrumental in the creation of the Rainbow Coalition (a term later appropriated by Jesse Jackson) which included the Black Panther Party, young White activist known as The Young Patriots and The Young Lords, a national organization of Puerto Rican activists co-founded by Felipe Luciano, who was also a member of the original Last Poets.

Combined with his accomplished skills as an orator and his willingness to organize beyond the Black community, Hampton was the prototype for the next generation of Black activist, a possibility that was literally killed in the early hours of December 4, 1969.

One of the tragedies of Fred Hampton’s death is that his presence would not be felt in the Marcy Houses that Jay Z came of age in, or in any of the like communities across this country were young Black Americans lacked examples of political agency and activism that were in sync with their lives at the dawn of 1980s. The period, best known as the Reagan era, was marked by the child murders in Atlanta, the explosion of crack cocaine in Black communities, the emergence of AIDS and the collapse of the kinds of social and cultural infrastructures that helped Black Americans survive segregation and racial violence throughout the 20th Century.

Hip-Hop initially filled that void and though early hip-hop was little more than the “party and bullshit” that seems so normative today, it ability to allow young Black Americans a voice and alternative ways to view the world may have been it most potent political achievement. For example, Chuck D would have been Chuck D regardless of Hip-Hop, but how many young Blacks became politically engaged because Chuck D had Hip-Hop. Indeed as Jay Z details throughout his memoir Decoded (written with Dream Hampton), the possibilities that Hip-hop offered were compelling enough to take him from the street life.

The easy part of this story is to suggest that Jay Z, as emblematic of a Black generational ethos, has squandered Hip-Hop’s political potential on the spoils of crass materialism, middle-management wealth and a politics of pragmatism (as embodied by his man Obama). The feel good move is to imagine a 61-year-old Hampton and a 41-year-old Carter sitting down in conversation with Sonia Sanchez to discuss the legacy of the Black Panther Party on Hip-Hop and Carter’s funding of the Fred Hampton and Shirley Chisholm Institute for Black Leadership Development (which by the way Mr. Carter, need not be a dream). Unfortunately the history of Black political engagement is not as simple as one of those Staples “easy” buttons.