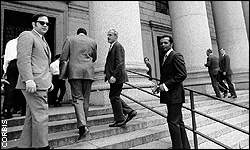 Nikki Giovanni once write that “death is a slave’s freedom” aptly surmising elements of Curt Flood’s life and his struggle against America’s white baseball establishment. Denounced for his efforts to challenge baseball’s slave-like conditions and crucified for his efforts to connect baseball to slavery, to American racism, Flood experienced neither vindication nor compensation in part until his death, at which time Flood tasted freedom in a certain way – freedom from the death threats, abuse, ridicule, and American racism.

Yet after watching HBO’s recent documentary The Curious Case of Curt Flood, I am less sure that “death is a slave’s freedom” in that Flood was unable to escape demonization and ridicule, as the film turned his life into a spectacle of sorts. In an effort to illustrate how the human cost faced by Flood and his family, to highlight the difficult path to redemption, the film spends an overwhelming amount of time on Flood’s personal tragedy. Evidence in the divorce from his initial wife shortly after he fought to live in an Alamo neighborhood and the financial, emotional, and physical impact on Flood during and after his suit against Major League Baseball, Curt Flood’s life is a testament to the costs of resistance and struggle.

Yet, the film goes too far in this respect, turning Flood’s life into a spectacle, a train wreck that the audience is suppose to stare and marvel at for the duration of the film. Focusing on alcoholism, fraudulent paintings and the personal demons that haunted Flood, The Curious Case of Curt Flood highlights the narrative grip that confines Flood in our contemporary moment. In “The Way It Is: HBO’s The Curious Case Of Curt Flood,” Nasir Muhammad & Stephane Dunn elucidate the film’s flaws in this regard, seemingly questioning its narrative focus on the tragedies experienced by Flood and his ultimate redemption, turning an important history into a “E’ Hollywood” story. They quote Stan Hochman, whose critiques of the film illustrate the powerful ways that death is not a slave’s freedom:

The courageous athlete who dared to challenge an unfair system is depicted as an alcoholic, a womanizer, a woeful husband, a dreadful father, a lousy businessman and a fraud who never really painted those portraits he churned out that enhanced his image as an artist . . . .In the history of warts-and-all biographies, this one slithers near the top of the list.Curt Flood was a freedom fighter. That didn’t begin with his challenge to Major League’s Baseball Reserve clause or his rhetorical links to a larger history of slavery