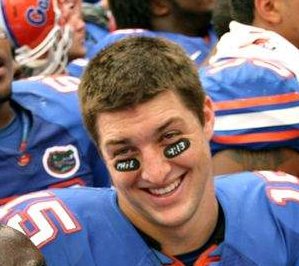 Tim Tebow is ubiquitous. Everywhere we look, Tim Tebow is there. Whether celebrating his “accomplishments,” attributing the Broncos season to his comeback heroics, reflecting on his now famous on-field genuflections, or debating his treatment by media and fans alike, Tim Tebow has captured the national imagination.

In many ways, the national fascination with Tebow reflects the power of whiteness. Historically the quarterback has been a positioned reserved for white men. Seen as a position that requires intelligence, leadership qualities, and proper mechanics, the NFL has historically engaged in, position segregation, and more than a little bit of Jim Crow on the field. That said, Tebow doesn’t follow in this tradition; he plays the position in a gritty running style that has long been associated with blackness.

In Am I Black Enough for You, Todd Boyd identifies a dialectical relationship between racialization and styles of play where whiteness represents a “textbook or formal” style, which operates in opposition to “street or vernacular” styles that are connected to blackness within the collective consciousness. As such, he describes a hegemonic narrative where “white” players adhere to “ . . . a specific set of rules [that] determines one’s ability to play successfully and ‘correctly’” (1997, p. 115). In both styles of play, notions of intelligence, mental toughness, and mental agility are all at work.

Tebow embodies a vernacular or extemporaneous style that has (historically) been associated with blackness and as a result of this association that same style has been devalued. Yet, for Tebow it has been embraced, celebrated as both innovative and as an example of athletic heroism. The celebration of Tebow, like the praise for some receivers, or safeties, comes from the shock and awe of white success in areas that are generally (assumed to be) dominated by black bodies.

Writing about Jordy Nelson, a white receiver with the Green Bay Packers, Ron Demovsky attributes his success to racial stereotypes: “There’s a joke in the receivers meeting room that Nelson benefits by being the only white receiver on the team because perhaps opposing defensive backs don’t take him seriously.” So while Tebow may only complete a few passes per game, the power in his athletic narrative rests with his ability to play quarterback in a style not associated with whiteness; the beauty for many commentators is in the spectacle and in his ability to convert this style of play into victories.