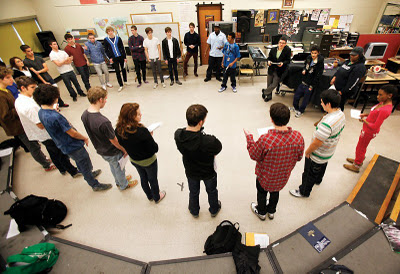 Politics as Usual: Decoding the Attacks on a Liberal Education

Few university courses generate much attention from mainstream media, but Georgetown Professor Michael Eric Dyson’s course “The Sociology of Hip-Hop: Urban Theodicy of Jay-Z” has drawn national attention from NBC’s Today Show, The Washington Post, The Associated Press, USA Today, and Forbes.com among many others. To be sure such attention is not unusual for Dyson, who is one of the most visible academics in the United States and has offered courses dealing with hip-hop culture, sociology, and Black religious and vernacular expression for more than twenty-years. Yet, such attention seems odd; hundreds of university courses containing a significant amount of content related to Hip-hop culture and Black youth are taught every year—and have been so, for more than a decade. In addition, there are dozens of scholarly studies of Hip-hop published each year—Julius Bailey’s edited volume Jay-Z: Essays of Hip-Hop’s Philosopher King, among those published just this year—and two Ivy League universities, Harvard and Cornell, boast scholarly archives devoted to the subject of Hip-Hop.

Any course focused on a figure like Jay-Z (Shawn Corey Carter), given his contemporary Horatio Alger narrative, and his reputation as an urban tastemaker, was bound to generate considerable attention, but the nature of the attention that Dyson’s class has received and some of the attendant criticism, suggest that much more is at play.

In early November, The Washington Post offered some of the first national coverage of the class, largely to coincide with the arrival of Jay-Z and Kanye West’s Watch the Throne tour to Washington DC’s Verizon Center. Jay-Z dutifully complied with the attention by giving Professor Dyson a shout-out from the stage. The largely favorable article about the class, did make note, as have many subsequent stories, about the cost of tuition at Georgetown; as if somehow the cost of that tuition is devalued by kids taking classes about hip-hop culture.

Other profiles of the course and Dyson have gone out of their way to make the point that the course had mid-term and final exams, as if that wouldn’t be standard procedure for any nationally recognized senior scholar at a top-tier research university in this country. Such narrative slippages speak volumes about the widespread belief that courses that focus on some racial and cultural groups, are created in slipshod fashion and lack rigor; it is a critique that is well worn, and that various academic disciplines, such as Women’s Studies, Ethnic Studies and even Sociology have long had to confront.

via NewBlackMan: Politics as Usual: Decoding the Attacks on a Liberal Education.