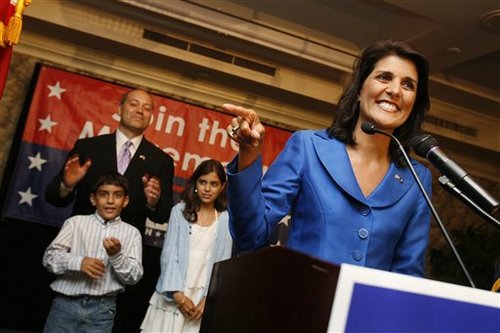 Growing up South Asian in the United States in the last few decades was not exactly awesome if fitting in was central to your identity development. If you grew up in the city, you probably didn’t feel like you belonged to the other more populated immigrant communities around you and if you grew up in the ‘burbs or rural areas there’s a good chance you were one of the only non-white people in your town (like me).

In a country where the diversity model is either you are white or you are added to the diversity salad by claiming a racial and ethnic identity in it’s most “authentic” sense–growing up at a time when there weren’t a lot of South Asians didn’t leave you with many options. It also dictated the choices and values South Asian Americans came to hold (think “model minority” and all its discontents).

Which is why, Nikki Haley’s decision to mark herself as white, despite her South Asian origins, on her voter registration card is indicative of much larger cultural forces than a personal moment of ambivalence, dissonance or confusion. Her decision to identify as white is part of a system of racial categorization.

Amardeep Singh, a writer for South Asian political blog Sepia Mutiny, writes on his own blog in response to Taz at SM, two points about what he thinks is wrong about calling Haley out for this racial categorization of herself: