America’s Most Wanted? The Locked Out NBA Baller 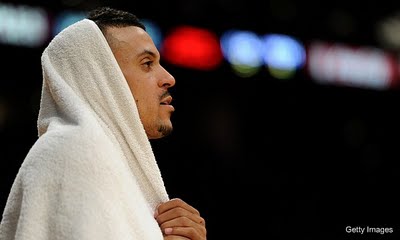 America’s Most Wanted? The Locked Out NBA Baller

While the NBA players remained locked out by the owners, they continue to be subjected to what Alice Walker describes as “a prison of image, whereby stereotypes function not as errors, but rather forms of social control.” The media reports resulting from two separate altercations invoking Matt Barnes and Michael Beasley, and efforts to connect them to the NBA lockout, the culture of the NBA, and blackness demonstrates the power and threats inherent in these imprisoning images.

Trying to wax sociological, Chris Haynes, in “Overseas Not Problem, Pickup Games Are NBAers will continue to get into trouble if they keep playing streetball, ”uses Beasley and Barnes to point to the bigger dangers of the NBA lockout: the NBA player. “The NBA just like any other professional league, is also comprised of young, immature, volatile, emotional players who need structure in their lives 365 days out of the year. Unable to workout and have contact with their individual teams, players may be left searching for a good pickup game to stay in shape.” In other words, the NBA lockout will lead these immature and volatile to be free on the streets (playing street ball), just waiting to attack the nearest fan or competitor.

Celebrating the “grounded players such as Steve Nash, Derek Fisher, Tim Duncan and Dirk Nowitzki” (the good ones) Haynes is concerned about the behavior of the OTHER (the bad ones) NBA star during the lockout. He goes on to argue that the danger stems not only from the lack of structure experienced during the lockout, but the backgrounds of the players themselves:

Several players come from poverty-stricken backgrounds and still have some form of street mentality embedded in them. In the heat of the moment, competing against amateurs who are disrespecting and derogating athletes in their face, is a bad recipe for something potentially to pop off. Beasley and Barnes are lucky, it could have escalated to firearms.

The efforts to link “poverty” to criminality is problematic at many levels. At one level, it demonstrates the power of stereotypes and racial narratives relative to black bodies given the backgrounds of both Barnes and Beasley. Barnes, who was born in Santa Clara, California, and grew up in Sacramento, is the son of Ann and Henry Barnes. His mother, who died of cancer is 2007, was an elementary school teacher that worked with mentally challenged kids. His biography (like so many in the NBA – over half of NBA players grew up in Suburban neighborhoods) doesn’t mesh with the stereotypical discussion of inner-city ballers that Haynes works through in this piece. Likewise, Beasley, who was home-schooled and raised by his mother, Fatima Smith, exists on a different plane.

For Elizabeth Alexander, the nature of racism within the United States is defined by practices wherein black bodies are systematically displayed “for public consumption,” both in the form of “public rapes, beatings, and lynchings” and “the gladiatorial arenas of basketball and boxing” (1994, p 92). Jonathan Markovitz similarly locates the criminalization of the black body within the narratives of the sports media: “The bodies of African American athletes from a variety of sports have been at the center of a number of mass media spectacles in recent years, most notably involving Mike Tyson and O.J. Simpson, but NBA players have been particularly likely to occupy center stage in American racial discourse.”

Amid the NBA lockout, the narrative space available for NBA players is increasingly limited to the projects of demonization and criminalization that are central to white supremacy. The coverage afforded to these instances, the efforts to spotlight their missed-steps as evidence of a larger problem facing the NBA, the narrative prison that links them to larger frames regarding black criminality, and the rhetorical devices offered demonstrates the process of criminalization central to the history of black America.

TO CONTINUE READING GO NewBlackMan: America’s Most Wanted? The Locked Out NBA Baller.